Heat islands are a growing issue in cities, with heat from buildings and pavement leading to higher temperatures and increased energy use. Roof surfaces, in particular, absorb a tremendous amount of solar energy.

There are many ways to mitigate the heat island effect. A green roof, which is a roof covered with vegetation, is one of them.

We also know that solar panels are an effective way to harvest renewable energy from sunlight. They not only harness the energy of the sun but are also block the sun’s heat from buildings.

What if we could combine the two technologies to reap the benefits of both green roof cooling and solar panel energy generation? Is this feasible, and what are the advantages? Would that be possible and what would be the benefits? 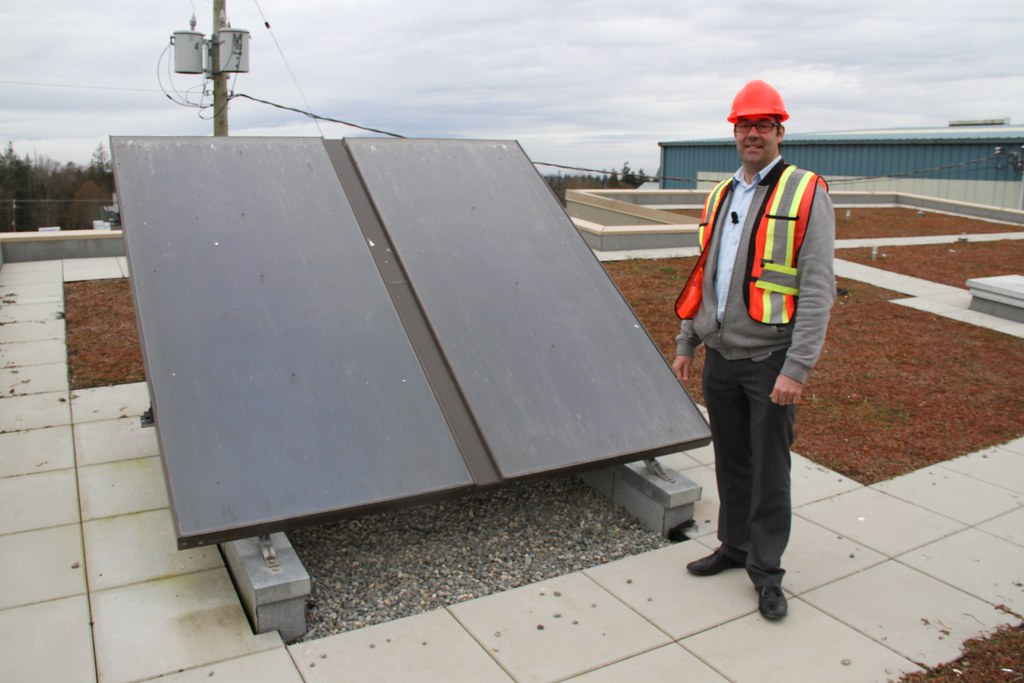 The answer is yes, solar panels and green roofs can coexist. The two technologies can be combined in a variety of ways. Indeed, solar panels on green roofs are becoming an increasingly popular solution, with more and more buildings using them together.

The practice of combining solar panels with green roofs is also known as biosolar roofing. Biosolar roofs often look very similar to standard green roofs, with the difference that they include solar equipment.

Biosolar roofs, in addition to cooling and generating electricity, reduce the heat island effect, increase biodiversity, and beautify the building.

Why should you combine solar panels and green roofs?

Green roofs can help reduce the heat island effect on their own. However, when solar panels and green roofs are combined, the cooling benefits increase significantly. Because solar panels prevent sunlight from reaching the green roof.

Solar panels are an excellent way to generate renewable energy. When combined with green roofs, you not only reduce cooling loads due to the shading effect but also generate power.

Depending on the size of your solar panels and your building’s needs, you may be able to generate significant amounts of energy that can be used or fed back into the grid.

When green roofs and solar PV panels are combined together, it creates a win-win situation.

Green roofs integrated photovoltaic systems bring the benefits of green surfaces to the surfaces that would otherwise be left un-greened and unused on the roof.

On the other hand, the shade from the panels reduces evaporation rates and drought stress, which helps plant species and arthropods to thrive.

By creating shade underneath the panels, a biosolar roof allows various sorts of plants to thrive that would not be able to grow without the solar panels.

When solar panels are combined with green roofs, vegetation has been introduced that aids in the absorption of rainwater. This reduces stormwater runoff, which can aid in the reduction of roof ponding and storm drain blockages.

Roofs with solar panels only are not very attractive. However, when combined with green roofs, the result is a very attractive roof terrace. This provides occupants with the space for leisure activities and recreation.

The solar base is ballasted by the green roof substrate, which eliminates penetrations through waterproofing. This can be an important consideration for buildings in high wind zones and regions with severe weather conditions.

Green roofs also improve the performance of solar PV systems by lowering maintenance requirements due to reduced dust and air pollution exposure around the roof.

Protection of the waterproof membrane

Other indirect economic benefits include the protection of the waterproof membrane beneath the substrate, extending its life duration, and increasing the property value.

What are the primary design considerations of biosolar roofs?

When designing a biosolar roof, there are a number of things you need to take into account. Here are some of the most important things to consider:

Biosolar green roofs provide spatial heterogeneity due to changing substrate thickness. The recommended thickness in front of the panels, where the conditions favor low growing species and succulents, is 5-7 cm for a length of 50cm.

The ideal thickness for the back of the panels, where conditions favor plant development and biomass, is 15 cm.

Where solar panels are not present, it is possible to increase the spacing between solar arrays by up to 80 cm and the substrate thickness by up to 20 cm.

It is also recommended to enhance the area free of vegetation along the edge and near water outlets to encourage xeric insects.

Because the substrate acts as a ballast for the solar panel structure against the wind, excavation dirt combined with sandy gravel from local pits is recommended.

Plant species with varying adaptabilities are supported by the diversity in substrate thickness and panel shade.

Drought and stress-tolerant species can be planted in the front of the panels, while competitive and ruderal species are recommended towards the back where circumstances are shaded and humid.

Plant species must be native to the local biogeographic region, with species richness of 6-10 species per square meter.

What is vital is that the plants do not shade the panels, reducing energy production; hence, pulvinate, creeping, and prostrate plants should be favored.

It is also critical that the water required for plant growth can reach the area beneath the panels. This can be accomplished by applying a material layer that will disperse the water uniformly via capillary action (e.g. fleece).

Mowing is not required, and maintenance is minimal, occurring about once a year. If mowing is done, make sure the biomass is removed to avoid the nutrient buildup that could harm the established habitat. In nature, wild species thrive in low-nutrient soils.

Biosolar green roofs are an exciting new development that brings together two technologies solar and green roofs to produce a symbiotic environment that can provide multiple benefits.

They maximize the use of space on the roof for our advantage while also providing environmental benefits and minimizing the amount of maintenance required.

So if you have a green roof or solar panels by themselves, consider combining the two technologies to create a biosolar green roof.